So, here’s a funny and potentially helpful story. I'm sharing it in an effort to do my part to make the world a better place. You're welcome.

[To warn the squeamish, it involves bodily functions. To protect the innocent, all names have been changed.]

Don't say I didn't warn you.

One day, Freddie, who was a small child, was sitting on the toilet, trying to go. He was really uncomfortable. His mother, noticing his anguish, checked one of her many natural remedy books (Natural Healing For Children: An Essential Handbook for Parents

), thinking maybe she should give him some Vitamin C to get things moving. The book, however, suggested using acupressure to ease his constipation. As soon as she pushed the spot described in the book (which will forever be known as the Poop Button in their household- yes it deserves the capitalization), he immediately shouted, “I’m pooping.” As, indeed, he was. Later, Freddie’s mother was recounting the harrowing tale to a friend and proceeded to demonstrate the acupressure spot on herself. Within 5 minutes, she, too, was running toward the bathroom.

Though the names have been changed, this story is 100% true.

So, you wanna know the spot that helps with constipation? 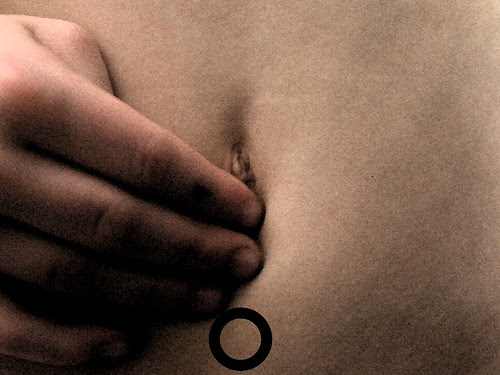 It's called the Sea of Energy (aka Conception Vessel 6) and is located three fingerwidths directly below the bellybutton.

A couple of tips to remember for acupressure…
-Always measure any ‘fingerwidths’ with the fingers of the person being acupressured. That keeps the ratios the same.
-Don’t push on the spot if you have long fingernails. You can use the eraser on the end of a pencil.
-Use firm pressure, but not super hard.
-Back off if this causes pain. If this happens, retry it very gently, slowly and steadily increasing the pressure. Also, focus on the breath if this happens, as it can help to release stress and pain.
-Sometimes this works in as little as 5 or 10 seconds. If it doesn't, feel free to continue applying pressure for 1 to 3 minutes. Don't hold it for more than 5 minutes, though.
-I would also like to add that, in our house, we don't have problems with chronic constipation and this method has consistently worked within a minute or two. For cases of chronic constipation, it might require more frequent (and maybe shorter) sessions of acupressure.
(Thanks, Britt, for asking for the clarification on this.)

Personally, I think there should be public service announcements about it.

It could be sponsored by "The Committee that Doesn’t Want to Sell You Anything or Make Money Off of You in Any Way, but Just Hopes that You Have a Pleasant Afternoon. Because the World is a Much Nicer Place when It’s Inhabitants Aren’t Constipated."

So glad you decided to leave a message! Feel free to talk about yourself and don't worry if you tend to leave marathon comments. I don't mind. In fact, those are my favorite kind.

Finally, feel free to type your website address within your comment because one of these days I will be moving my blog and would like to retain links to all of you wonderful people (the blogger formatting of commenter links doesn't get transferred properly).